While LinkedIn ads and sponsored posts are great for raising awareness of your company, brand, and business along with generating leads, it can be somewhat cumbersome to set up if you just want to promote a company update post without having to set up a full ad campaign.

Thankfully, LinkedIn has taken on feedback from users and has announced that it will be releasing a new boost feature for posts. While this is a feature that has been available for Facebook business users, it's nice to see the feature be replicated on other platforms. 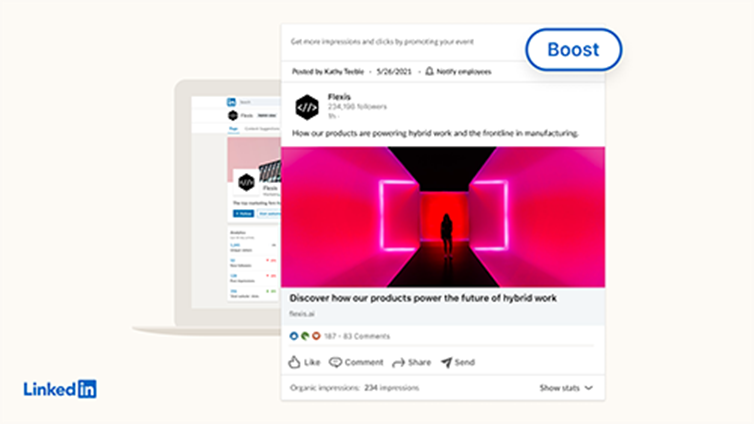 The new boost feature will allow companies and pages on LinkedIn to further increase brand awareness, video views, engagements, and website visits. The boost feature will certainly help with that and will be a welcomed addition to those who use LinkedIn Ads. We should mention that boosting a post shouldn’t replace your planned and strategic LinkedIn ad campaigns, instead they will enhance them and allow you to really make the most of your short creative content or conversation starters without having to create a complicated ad.

The boost feature will be rolling out over the next few weeks and months, along with some additional features such as integration of live streaming services and software into LinkedIn Live such as OBS, Zoom, and Microsoft teams. We will be testing the new features ourselves in the coming weeks and will be integrating our findings into our LinkedIn training course so stay tuned for more updates on that in the not-too-distant future.

It feels like we have been talking about auto-captions for Instagram Stories for months now. Finally, after extensive testing, the feature is now starting to roll out to users and creatives.  You can customize the auto-captions in terms of text, colour, position, and font to ensure your Instagram stories are in line with your branding.

Users will also be able to edit the text generated by the auto-captions to ensure that you can avoid accidental spelling mistakes and text misunderstandings. This new feature will also start rolling out to those who are using the reels feature on Instagram. 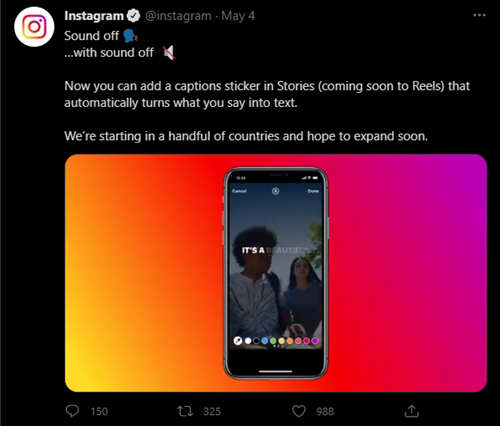 Instagram has also announced that users can now hide the number of likes on their posts. This is a feature that has been requested for a long time. Hiding likes on Instagram should make it more competitive in the crowded influencer market and also drive more positivity towards engaging with quality content instead of creators and brands chasing post likes. 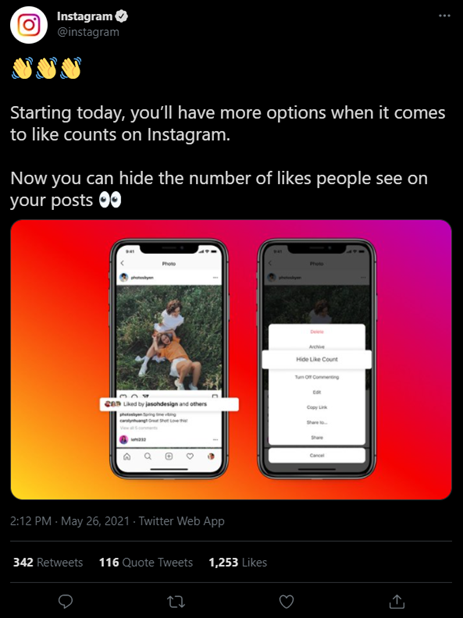 Finally, after being canceled last year, Eurovision returned to our screen again this month. For a solid 24 hours, Eurovision dominated most of the online conversations on social media in Europe.

It was great to see one of the largest music communities come back together for a stellar night. Sadly, James Newman’s UK entry ‘Embers’ failed to convince audiences and judges scoring the dreaded Nil Poi for only the second time in the competition’s 64-year history. If you have not seen it, here is the UK entry by James Newman.

Still, the positive takeaway is that Eurovision is back with a bang, and next year, the completion will be hosted by this year’s winners, Italy in Rome. We must admit the winning song by Maneskin is slowly starting to grow on us with its modern goth rock vibe.

While we might not have set this year’s Eurovision contest alight, at least we have next month's Euro 2020 football tournament to look forward to.

If you want to keep up to date with the latest stories, apps, and trends happening within social media, why not subscribe to join our mailing list and we will send you a regular monthly round-up.